The wind sliced from the north and pierced clothing normally worn while working around a farmyard on an early May morning; that wind’s edge honed sharp enough to make light gloves and an extra layer of jacket the preferences for any old spirit spending a decent amount of time out there.

That day was one of deceit – the azure sky fluffed with a few clouds and the sun’s spring warmth soothing. It was to be a day of some chores and then of sitting out with pen and paper to inhale the fragrance of words carried on the season.

But oh, for that wind.

All was perfect but only if there was shelter from the wind, maybe on the sun-splashed south side of one of the farm buildings, or on the base of an old oak’s south side. I didn’t have time to linger long at such places and instead went about the light work that needed to be done and then made my way to find warmth in the old farmhouse’s safety.

The old house greeted my spirit with a hug from Dee when I entered, and kissed my cheek with a warm cup of coffee in hand extended to me.

There were projects that needed to be dealt with in the house, some of them of unsavory mathematics and numbers and calculations I so abhor. Instead of turning attention to those things I allowed my eyes to drift to the beauty on the other side of the windows’ glass. My being followed and, though still sitting in the house, I still felt the wind scratching its cold fingers through my shirts.

I reached for a heavier shirt. An old photo was on the table where I’d cast the heavy shirt the previous night. After I pulled it on, I reached to pick up that photograph, a relic that I’d known for most of my life but which I’d only regained possession during more recent days. 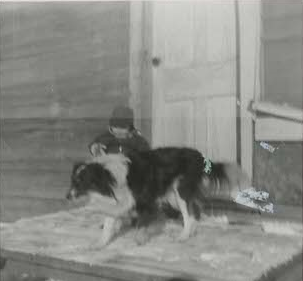 There in the fuzzy black-and-white image I stood as a 2-year-old boy with Ring, the first dog I’d known at our family’s farm at Veefkind. My mother told me many years ago that the photo was taken on an early spring day, with snow still on the old Veefkind farmhouse’s back porch where Ring and I were standing.

Photograph and coffee in-hand, I roamed to the kitchen to continue warming myself with daydream-gazes outside through the windows and with the memories carried in that photograph.

Dee added additional warmth with her offering in a porridge of grits her southern-born brightness so taught her to master.

All was there, right then – my past and present – giving me no excuse for my body to know warmth.

I recalled that old Veefkind porch, so simple and small but to a child of young age a grand place to spend hours. It was the sort of warm place I’d been seeking while outside only moments earlier; memories of long hours of childhood daydreaming on that south-facing porch while in repose with the sun and Ring and favorite dog Laddie who followed.

That porch provided warmth when all around could seem cold. It became a sort of headquarters for me in those youngest years. And then, even during coming-of-age years it was a place where I could find the sun’s gentle embrace even when all in a boy’s life starts to become so overturned and confusing.

That porch has been considered many other times during my life. I’d often found warmth from it when the cold of confusion seemed so overwhelming.

I’ve wondered whether we’ve all needed to hang onto a place such as that rickety old porch, it gone from reality for so many years.

There always will be some warmth from a cold spring wind found on the old Veefkind porch, and I’ll always hold that in my spirit’s photographs. But I’ve found the greatest and most fulfilling warmth here at our home on the Eimon Ridge.

There’s a spot in one of our gardens that provides such protection from those cold spring winds. The protection is on the south sides of those old oak trees and around corners of the house and barn and machine shed. It’s hunkered on the south side of the small hill that rises a few feet west of our house. Those spots allow the youthful thoughts and dreams brought by the old Veefkind porch, but they also allow fulfillment of needs for more mature contemplation about life and this land.

And then, on that May spring morning, I felt the gentle touch of Dee’s hand on my shoulder as I sipped the warm coffee and spooned the hot grits she’d offered when I’d come back into our old farmhouse – that which is home as we’d never known. It brought a reminder that I’m warmed here in the present and will be until my old bones are returned to the soil.

I am warmed, then, in spirit and in body by all I know on this ridge.

One thought on “Warmed Shelter from Cold Winds”