The vixen pranced back and forth, her auburn hair dancing in the spotlight with every step as she pranced along.

I don’t really like turning the old farm house’s yardlights on when I go outside at night, me enjoying the darkness and the chance to see more what’s in the sky over our rural place so much more brightly than what can be seen through the lights of even the smallest of street-lit villages or cities. But I’d forgotten something in the farmyard and that night needed the light on to retrieve it.

The light startled the fox that had been visiting the lawn in front of the old house. Perhaps she’d been there seeking some exquisite evening dining fare on one of the many rabbits that each night visit the soil around my bird-feeding stations.

That wouldn’t always have been the case with her or the many other fox from her family that have visited this homestead on Eimon Ridge in the decades since we started borrowing this land from the soil’s spirits. Until recent years, we had what gently could be described as a Hatfields and McCoys relationship.

We met when Dee and I a 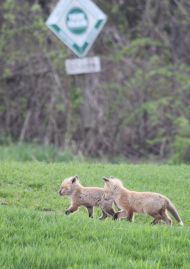 dded chickens, ducks and turkeys to our small farm’s menagerie and immediately didn’t see eye-to-eye – especially on that morning when I was woken by a chicken’s squawking right below our bedroom window. The sunrise was just tickling the ridge’s east horizon when I leapt from bed to see what was going on. That’s when I literally locked eye-to-eye with a fox standing immediately below the bedroom window, it holding a mouthful of tail-feathers from the chicken that had escaped its grasp.

The fox did its best third-grade look of innocence.

I disengaged our stare and sprinted sans trousers to my gun safe to put an end to that fox’s nonsense. The resident fox and its friends the fishers already had decimated our flocks for three straight years, and I was determined to put an end to it.

That fox and I played hide-and-seek for several hours around the farmyard, corn fields and woods. In the end I was…well…out-foxed.

Neighbor Jeff stopped in later that day to ask whether I’d noticed the family of fox that were living around our farm’s granary. He’d caught sight of them the day earlier, and it softened his curmudgeonly soul.

He sipped his coffee at our kitchen table and paused to contemplate his words. I expected him to mention how we need to rid the farm of those marauders.

“Man, those little ones,” he smiled through the coffee’s steam, “they’re cute as hell.”

I went to the barn later that day and peered around the corner. It took a while, but eventually they came stumbling out a gap in the granary’s concrete footing. One by one, they appeared, still-fuzzed little kits finding the sunlight after having spent much of the day in the darkness of the crawl-space beneath the granary.

There was a time in my life when I wouldn’t have hesitated at eliminating an entire family of those chicken-killing bastards. But that day I sat, mesmerized, watching the kits and their mother romp only a few yards from me on the lawn between the granary and road.

During that time, what would be another generation of chicken-killing-sons-of-bitches were our old cow-dog’s puppies; they were the kittens I’d find as a small boy exploring the hay-bales’ crevices in our family’s old barn over at Veefkind.

Those kits – those tiny foxes – somehow belonged on this old Eimon Homestead farm in the northern Driftless Area.

I swallowed my pride, that morning, and remembered the innocent eyes of that vixen’s early-morning look at me through our bedroom window. Maybe it wasn’t a look of want-to-be innocence, I thought: Maybe her eyes were expressing she and her family were hungry, and our farm’s chickens were the best source of food she could find that day.

I walked back to the farm house and contemplated what I was about to do.

The vixen and her kits would be allowed to use the granary’s crawl-space as their home. After all, I wasn’t planning to get another flock of meat-chickens or laying hens because I wasn’t as savvy as the foxes or the fishers – or, for that matter, the occasional owl or hawk that would snatch life away from one of the present poultry.

Weeks and months passed, and the family abandoned its under-granary home as autumn’s leaves tickled the land.

Wisconsin’s traditional whitetail deer hunt arrived in late November, and I took my seat against one of the farm’s old oaks to see whether I could harvest a little extra protein for that winter’s freezer. Daylight had just arrived when I heard a rustling in the leaves over my right shoulder – my senses springing to life with the chance that it was a whitetail buck shuffling itself toward me.

It wasn’t a deer. Instead, a small fox moseyed toward me and then stopped about five yards from me.

The fox turned its head side-to-side, studying me and seeming to consider his safety.

And then, the fox sat on its haunches.

The fox sat that way near me for the next 20 minutes; it eventually rose and stretched. It started to roam away from me, but then stopped to look back over its shoulder.

“Thank you,” the fox said in its glance, and then walked away.

I sat and chuckled at the fox’s moxie.

Was it an idiot?

Was it really visiting to thank me for allowing the family to live beneath our granary?

Did it know the choices I’d made?

Those answers, I knew, only could be answered by the spirits of this land, and I’m not one of those spirits.

The fox family has lived under that granary every year since – each year bringing another batch of fuzzy red puffs that prance in that space of lawn between the granary and the road.

I gave a nod of wondering approval to the vixen as I crawled into bed and picked up a book to read after our encounter that recent night in the farmyard’s light.

“Hunt well,” my mind whispered to her. “You’re a spirit of this place and I’m happy we can share this land.”